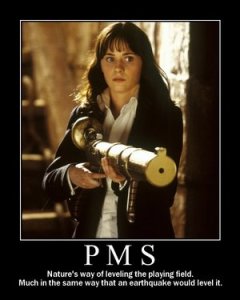 Peter insists in every discussion or argument: “You only feel that way cuz you’re a woman.” He chuckles and claims the only thing he as a man can do is nod and agree since I’m always suffering from PMS hormones like all women. No, I always tell him — I’m a person first.

According to Gavin, all women are “mean girls” — all catty and competitive with each other.  They are incapable of higher intellectual thought or functioning.  We are best suited to being check out girls or babysitters.  Furthermore, Gavin states women all think “that bitch crazy” at her job.  He has to hold his sides, he’s laughing so hard.  To him, that’s the extent of any conversation a woman can have with a man about work.

The sexist man wants to force you into his unrealistic, archaic “Mad Men” view of gender relations.  Nevermind how it doesn’t mesh with the reality that is LGBTQ and beyond.

But I think I see what these guys’ problem is. Aside from the lack of logic and virulent misogyny, as long as they continue to act like women are a separate species they don’t have to relate to us as fellow human beings.  And they can focus their energies on golf and football, hunting and boobie magazines.

You need to tell this fool about himself and cut him off.

Life is too short.

LOVE SCENE INVESTIGATION My significant other Casey is a fact-hound of sorts.  He’s a library of information about history, astrology, animal species and TV. It’s a lot of pressure to hold conversations with him because he over-examines and nitpicks everything … Continue reading →

I'm a New York City worker bee who's on the hunt for true love. I've been working + playing the field here for a few years, gaining insight into the mindgames of today. I have great relationships but life here demands you not stay stupid.

I've learned a lot from real people -- my family, my friends, my haters, story circles in the Feminist/Womanist movement, and the bar.

Pitfalls abide in this adventure called Manhattan living so I'm writing you a manual. This step-by-step guide will help you confront + manage the colorful suprises in store when working with and dating a Lifesavers roll assortment of hotties, notties, the morally bankrupt & the emotionally unhinged.

DONATE TO KISSING UP!

These powerful stories are real -- names are changed to protect identities. But sharing stories is how we learn what to look out for in our own lives. Submit yours today!

EACH ONE, TEACH ONE-

"Before you diagnose yourself with depression or low self-esteem, first make sure that you are not, in fact, simply surrounded by a**holes."

Error: Twitter did not respond. Please wait a few minutes and refresh this page.

DONATE TO KISSING UP!